It was not so long ago since I had given up on myself. Optimism had vanished and I’d look down on myself frequently. I also stopped running- something that I acquired in the previous year. Never tried running in past because of my flat foot and people kept telling me I can’t. So here I was, lost in negativity, a flat footed, awkward runner wanting to start from scratch.

I had completely cut myself out of social media during my first year exam of MD Paediatrics in Homoeopathy. Struggling through the study period I realized that I’ve neglected my mind, body and soul in the race of life. There sprung a feeling to do something about it.

Post exams, I was back on social media and I stumbled upon – 100 days of running Challenge which was intimated by Adidas on their Facebook page. I ran on weekends with Adidas and felt elated after every session.
I asked a couple of people from Adidas Runners if I could take up this challenge. Unsure if I could do it or not, I asked my best friend if he thought I could and he encouraged me with his positive words. Filled with doubt, I spoke to my mind. I told myself, that it’s you who has to run, did you ask yourself first? Then I finally got the answer to this and it was Yes! Yes! Yes! 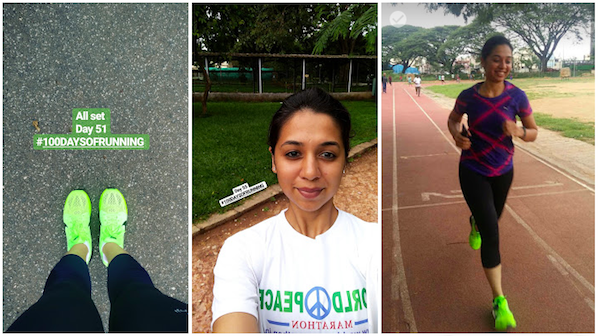 It was a great start with some motivation from Team Adidas who conducted the first day at Sree Kanteerava Stadium. The aura was so positive that I started feeling happy from that point itself.
Came back home with a burst of happiness and told my mother, I’m taking up this challenge. She supported me instantly.

I thought 2km per day was something I could do. Here, I stopped doubting myself and started believing in me. Started my initial days by running 2km per day preceded by a good warmup and a stretch after the run. I was being as safe as possible, because I dint want an injury to stop me. I gradually increased my distance over time to a 5k once a week at least. 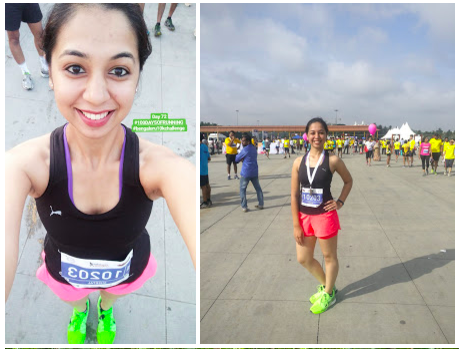 I started posting my journey on social media i.e. Instagram and Strava, giving an update on daily basis. I would click pictures of myself or the places I ran at or the people I ran with. The amount of admiration, encouragement and motivation I received from the world was immense and kept me going. My sense of happiness doubled, when I motivated people to get up and go for a run, workout or cycle. One of my friend actually started a self challenge of 50 days of running and gave me credits for motivating him to run. That feeling was priceless.

During these 100 days, I ran everyday, ate smart and worked hard. I enrolled myself for some small runs, fitness activities and workshops. I could see that I was driven and I wanted to know more on how I could get fitter.

The real challenge for me was how I could get myself running even if I had to go to the hospital and college. If I missed my morning runs I would run post 9 or 10pm. I would make plans according to when I want to run. I also avoided making plans because I have to run. When I travelled to Mangalore and the weather conditions dint allow me to run the whole day and by night I was running in circles in the basement. I dint give up on running be it sunshine or rain. I carried my shoes everywhere I went. Be it during the time of the month or a runny nose day, I would just run. My day revolved around my run and I started loving it.

On the 50th day, with my energy levels high, I was proud of myself that the person who never ran was half way down. I decided to reward myself with an awesome pair of new shoes. After this there was no stopping for this #HomoeopathWhoRuns.

So day 72 brought me more self belief when I attempted the tough Bengaluru10k Challenge which I completed in 72 mins,which is also my personal best. Nervous at the start as it was my first 10k in my 100 day journey but later it was all worth it.

After this, whenever I ran, my friends and family always were there for me. My mother would join me when I said I needed some company , at least for a stretch session. My cousins and friends accompanied me for running as a recreational activity.

The running bug bit me and there is nothing that could stop me from it. This journey has reflected so much on my personal life. I have become positive, I can work the whole day and still have energy to finish my run, learnt a lot about myself, started loving my own company, depend less on others for my happiness or running, and most importantly I was mentally fit which in turn is giving me a fitter life.

Being a Homoeopath, we realise the importance of mental health and its reflection directly on the physical plane. This journey not only gave me a practical experience but a reason to enlighten others about it.

I thank Adidas to have suggested this challenge to me and all those who have supported me during this whole journey. My mother who was there always with me, gave me company, fed me well and took care of me in times of need. My friends who motivated me throughout and dint let me give up anytime. This is one of the nicest things I’ve done for myself and these were the happiest days of all.