Anurag Sharma from Delhi NCR is one of the very few runners from the 100 Days of Running community who can claim to have run an entire year, 365 days of non stop running. Anurag shares his story with us.

( A sincere disclaimer at the start line itself – m not a habitual writer /blogger, so please bear the lengthy description, as it is! Thanks )

As I look back at the period April 2016 till date, a unique and extremely satisfying feeling engulfs me. It was mid April last year, when “Run Freaks” ( formerly, GRC – Ghaziabad Runners  Club), a wonderful running Group of Delhi-NCR, of which. I am privileged to be a member, informed me about the 100 days of Running Challenge ( 2nd Edition) initiated by Runner Tanvir Kazmi ( Indirapuram, GZB) w.e.f. 30/4/16 to 07/08/2016. A very flexible challenge in respect of terms n conditions, barring one ( n that’s the hard one) – To run at least 2 km daily for 100 days, COME WHAT MAY! Being (constantly) in and out of running since 2009, when, due to motivation and guidance provided by runner Pankaj Arora, I took part in my first H/M ( ADHM’09 – 2:39 mts), I thought it as a great opportunity for gaining running consistency. Wasn’t running much since last ADHM’15 (2:35 mts) at that point of time. So, knowing my past track record of (in)consistency. I registered for the 100daysofrunning challenge with a considerable amount of skepticism in my mind. 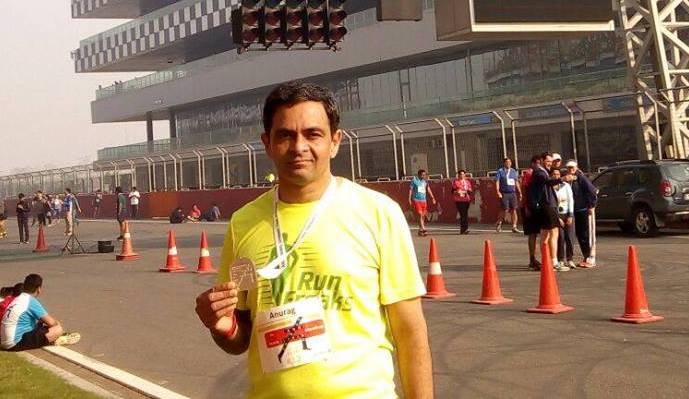 Simultaneously, our “Run Freaks” group floated another challenge “100 Days No Sugar” challenge for the same period. Initially, being an owner of ‘Sweet Tooth’, was a bit apprehensive, but still, enrolled in it as well, to give it a try.But with our Group’s mutual support / cajoling, it happened. In the initial days, had to control my hand from grapping the easily accessible sweets, cookies etc. at home & office. But, surprisingly enough, within a fortnight, the mind adapted to it n the cravings diminished as well. Also, whenever any plate of Loddoo, cake or Rasgulla passed untouched , a sense of elation was felt.

My relatives, not directly, but through diplomatic hints, confirmed whether this sudden change in eating habits and theconsequent weight loss) was due to Diabetes being diagnosed! It’s an understandable reaction, I don’t blame them for their apprehension.

Back to my running experience. Surprisingly enough, for the first month, it was a smooth sailing, with minimum 2 km run on weekdays, and some more distance on weekends. Then, come June’16, my job responsibilities changed, 5 days working week to 6 days & longer working hours added. But, by now, the strong desire to complete the challenge had strengthened its roots, so when morning run got missed, late evening / night running compensated for it.

And then, the first instance of challenge arrived. I, alongwith my wife Nandini, went to Haridwar, our in-laws place. Deboarded the train early morning. Knew for sure that daylong activities at Sasural won’t permit for the run once I reach their place. So, at the railway station itself, requested my wife to relax for a while in the Waiting Room (to which she readily agreed). Then I set off towards nearby Bilkeshwar Road ( a hilly one), did my day’s run there, and then we proceeded further. Ah, that day’s task was accomplished.

Other than that, one or two night runs, sometimes in light drizzle, took place. And then, the day arrived. On 7/8/16,  It was a glorious moment for us all, when we gathered at India Gate, met Tanvir sir and many fellow runners who got through this challenge and celebrated our fulfilling achievement. We shared our exciting experiences with each other. Event T-shirts n medals were made available there, who opted for it. T;s were instantly wore there itself by many. My T and medal arrived a few days back via courier.

The benefits achieved through this challenge were quite evident. During this 100 days period, considerable weight loss ( without fatigue) took place. Energy level improved, daily routine of getting up early , developed. And to top it all, my earlier favourite trousers, reluctantly stored for long, fitted me once again.

To reward myself for this success, I procured a Tom Tom GPS ( with Heart Rate Monitor) watch for ease of running.

The story doesn’t end here. The next morning, I experienced that absolutely without special effort, but by default actually, I was in my running attire, and did that day’s run as well. It was the moment, when I felt what miracle this 100daysofrunning has done. The thought of ‘Running daily’ had got absorbed in my mindset for future as well.  I was continuing my running schedule even after the challenge had finished.

Further, Like they repeatedly say in the Film ‘Om Shanti Om’ – “….The whole Kaynaat ( Universe) conspires to support you to achieve your goal , when you are firmly determined….”, I too had a similar supportive experience in November’16. That Monday ( our society gym’s weekly off day), I was a bit feverish & wasn’t feeling comfortable enough for evening outdoor run. But still, , went downstairs  for completing the day’s run, I was pleasantly surprised to see that our Gym’s lights were on, some maintenance work was going on there. I gladly hopped on the treadmill, & comfortably did that day’s run.

In December’2016, for our Revenue Departmental Sub-Zonal Sport Meet was to be held at Lucknow. I started practicing for my main event (1,500 m) at CWG track. Packed my breakfast n office dress, left them in car, did practice runs there, changed my clothes and headed for my office directly from there, to reach in time. There, on one Sunday morning, I was practicing wearing my 100 days T. Met Tanvir Sir there, who was supervising his son’s run there. During the course of chatting there, I told that I was continuing the daily running till date. He listened to me patiently, then told me that a guy in his office was continuing his daily run SINCE 1oo days challenge 2015  ( Ser pe Sawa Ser indeed). Got humbled instantly, n did 4 more laps that day. Few days later, had to catch early morning train for Lucknow.. So, at 3 am in foggy weather, managed to do the day’s run inside colony itself ( had to convince the security guards there, that all is well), and then proceeded for the journey. There, those 8 months of consistent efforts paid back, and I won Gold Medal in 1,500 metre event.

And Now, date for 2017 edition of 100daysofrunning (29/4/17) has been announced. I have registered for the same, this time my wife Nandini has also taken up this challenge. Running is contagious, u see. Incidentally, on the very same day, my 365 days of running will be completed.

Hope to continue this good habit further, reap health benefits from it and for the Joy of Running as well. My Sincere thanx to Tanvir Kazmi Sir for his initiative and providing an opportunity to amateurs like us to be consistently active.

So, feeling very much satisfied and thankful to God, family and my Run freaks group for this sustained journey, as I tie  my shoe laces for 364th day of running today.

All the best to you guys for the same.